Stony Brook, a comprehensive university center in New York State’s public higher education system, emerged from humbler beginnings as a small, teacher preparatory college in Oyster Bay only fifty years ago.  The Board of Trustees of the State University of New York issued their recommendation for the establishment of a new state-supported and operated college on Long Island on April 15, 1955. After two years of careful deliberations and intensive planning, SUNY announced the opening of the State University College on Long Island. The Board of Regents authorized William Robertson Coe's exquisite 350-acre former arboretum-estate, Planting Fields, as a temporary campus, while a new campus was prepared in the historic hamlet of Stony Brook, on a 480-acre tract of land donated by philanthropist Ward Melville. The first day of classes commenced on September 17, 1957. 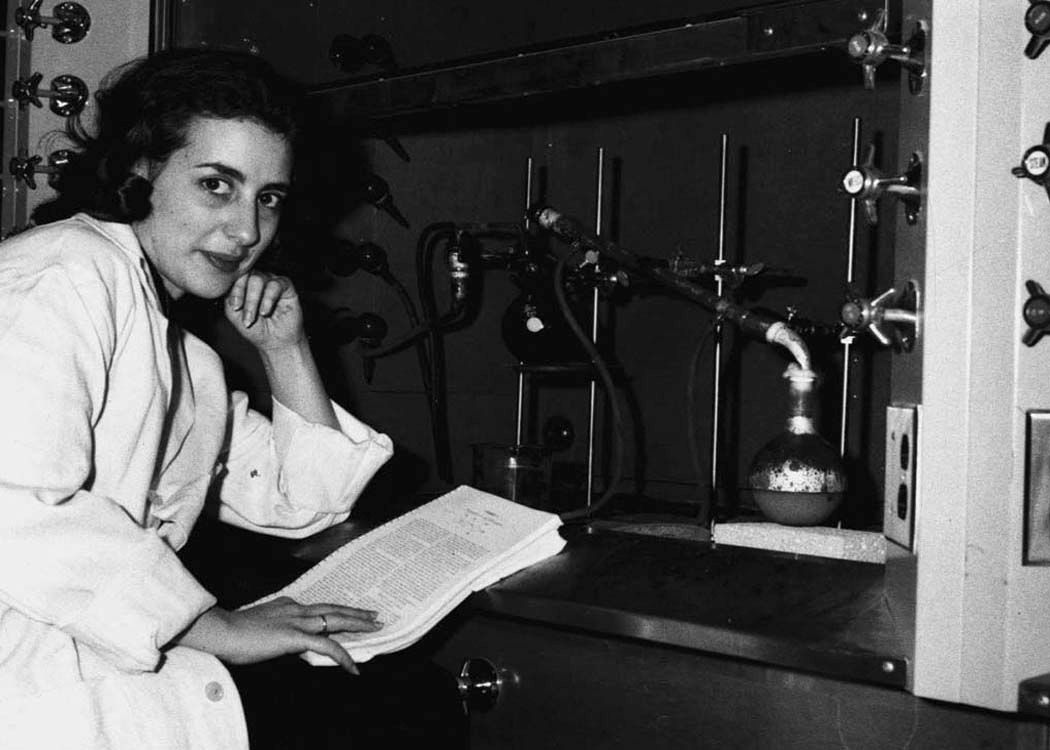 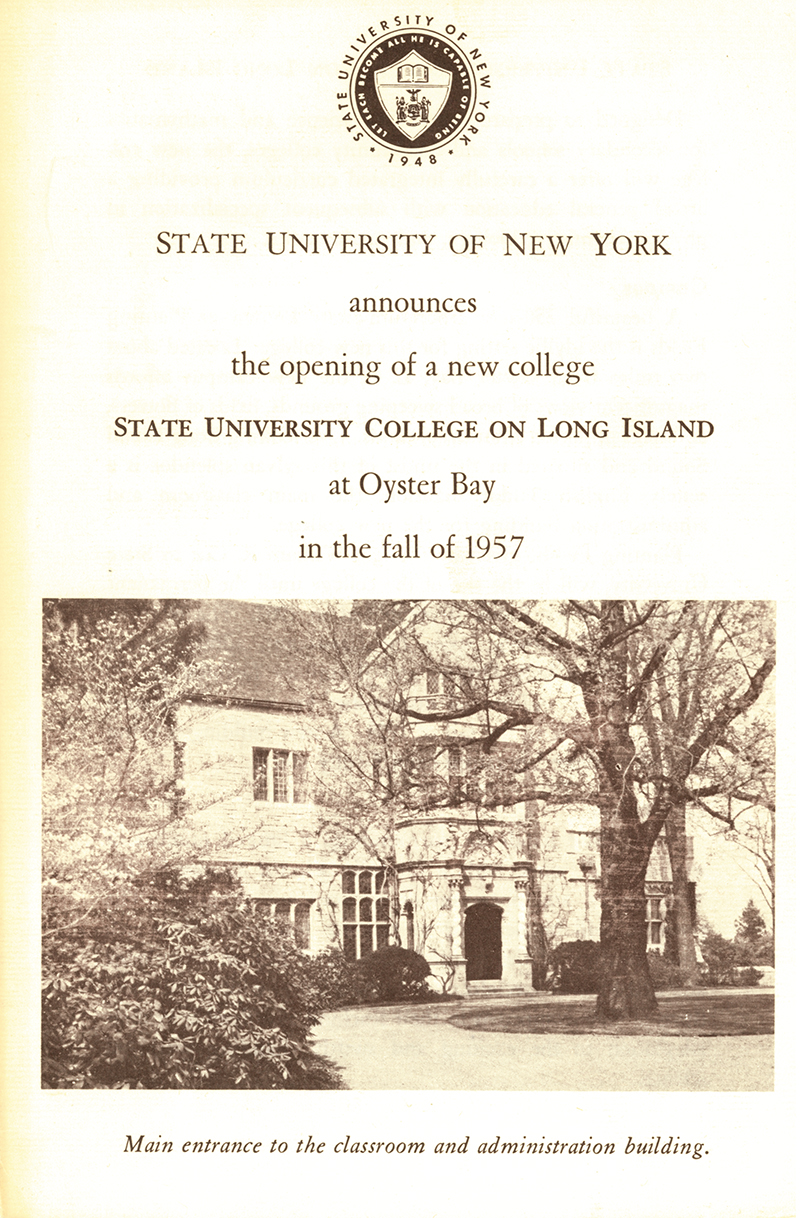 One hundred and forty-eight students were enrolled in classes at the tuition-free, State University College on Long Island at Oyster Bay. The College's administrators were served with the mandate to "prepare teachers of science and mathematics for secondary schools and community colleges." Course offerings were initially limited to Humanities, English (Communications), German, Social Sciences, Education, Mathematics, and Natural Science. SUNY expanded the College’s scope a year later to include degree programs in the fields of science, mathematics, and engineering.

The preparation of the Stony Brook campus began in 1959, when the State University of New York embarked on a $150 million building program on 480 acres of woodlands in Stony Brook. The construction coincided with issuance of the 1960 Heald Report, a study of New York State's higher education programs commissioned by Governor Nelson A. Rockefeller. This report recommended that a major new university center be established on Long Island to "stand with the finest in the country." On April 8, 1960, Governor Rockefeller, Ward Melville, and Frank C. Moore, Chairman of the SUNY Board of Trustees, turned the first spades of dirt at the formal groundbreaking ceremonies in Stony Brook. The new campus was designated a university center on June 6, 1960 and subsequently renamed the State University of New York, Long Island Center.

Dr. John Francis Lee was appointed as the University's first president on January 1, 1961. His mandate from SUNY was to convert the Long Island Center from a science and engineering college to a full-scale university, complete with liberal arts and sciences programs and a graduate school. Although these edicts were fulfilled, Dr. Lee left this post amidst political controversy in November 1961. SUNY President Dr. Thomas H. Hamilton was subsequently appointed as Acting Administrative Head of the University.

The Stony Brook campus opened on Sunday, September 16, 1962 with 780 students enrolled in its programs. The first buildings to be constructed were the Humanities and Chemistry Buildings and a single, corridor-style dormitory named “G Dorm,” comprised of two wings connected by a cafeteria. This building also housed the administrative and faculty offices, the student newspaper, student government offices, and the infirmary. The University continued to embark on a series of expansion projects to meet the needs of its soaring enrollment. By 1964, the University offered 232 courses within fourteen academic departments in the College of Arts and Sciences and thirty courses under four departments in the College of Engineering.

The Muir Report of 1963 recommended to Governor Rockefeller and the SUNY Board of Regents the establishment of a new medical center on Long Island. The complex would include "schools of medicine, dentistry and other health professions on the State University campus at Stony Brook, Long Island by 1970.” The University's administrators began planning for a comprehensive Health Sciences Center on Stony Brook's East Campus. The towers the Health Sciences Center were completed in three stages between 1976-1980 at a cost of approximately $300 million. Today, the complex is comprised of the Schools of Dental Medicine, Health Technology and Management, Medicine, Nursing, Social Welfare and the Long Island State Veterans Home.

John H. Marburger, III was appointed as the third President of SUNY Stony Brook in 1980. During his presidency, University Hospital was opened,  the Stony Brook Foundation acquired the Pollock-Krasner House, the former home and studio of artists Jackson Pollock and Lee Krasner and the Fine Arts Center was renamed "Staller Center for the Arts," in honor of benefactor Max Staller. Stony Brook's reputation as a center of scientific excellence continued to expand, as it embarked on a joint venture with Brookhaven National Laboratory, Cold Spring Harbor Laboratory and North Shore Hospital to create the Long Island Research Institute in 1992.

A new era in Stony Brook's history began on September 1, 1994, when Dr. Shirley Strum Kenny assumed the presidency of the University. Under President Kenny's leadership, the University has continued to thrive. A 1997 national study ranked Stony Brook one of the top three public universities in the nation in the combined research areas of science, social science, and arts and humanities. University Hospital was named one of the top fifteen teaching hospitals in 1998 in a study that examined 3,575 hospitals nationwide. Stony Brook obtained 12th ranking among all colleges and universities in the United States in royalties generated form inventions licensed to industry ($12 million), as it accounts for 98% of all SUNY-system licensing revenue.

The campus has also transformed physically, as President Kenny’s vision of a "heart of the campus" has come to fruition. Stony Brook's six-acre central mall has been completely redesigned and now features fountains, lush gardens, and a "brook." The University is currently in the midst of several expansion projects, including the completion of a 7,500 sports stadium. Charles B. Wang of Computer Associates presented $25 million to the University in 1996 for the construction of an Asian American Studies Center. Stony Brook Manhattan opened in January of 2002 and in 2006, the university acquired the former campus of Long Island University in Southampton, NY.

A new era in Stony Brook's history began on September 1, 2009, as the University welcomed its fifth president, Samuel L. Stanley Jr., MD. In his inaugural address, Dr. Stanley looked toward a vital future for the University and surrounding community: "We are young and vibrant, and we stand for all that is best about public universities — we are a home for research and innovation, a center for learning and scholarship, a champion of the arts, a center for outstanding and compassionate health care, and an engine for economic development and the creator of a pathway for upward mobility for the best and brightest and most diverse students."

Dr. Stanley's advocacy of the NY SUNY 2020 legislation, which provides critically needed funding for the State University of New York, has marked the early years of his presidency. He also initiated Project 50 Forward, a University-wide effort dedicated to operational excellence, academic greatness, and building for the University's future. Under Dr. Stanley, Seawolves teams have played under a national spotlight for the first time, winning the Big South football title and earning a berth in the 2011 FSB tournament.

On December 14, 2011, Dr. Stanley announced a transformational $150 million gift to the University from Jim and Marilyn Simons and the Simons Foundation. The Simons gift was the largest gift ever to Stony Brook University and to public higher education in the State of New York. It is among the top 10 gifts to any public college or university in America.

In keeping with Dr. Stanley's vision for the University's future, the Simons gift will fund three major priorities: (1) research excellence in the School of Medicine, (2) faculty hires through new endowed professorships, and (3) recruitment of top-level graduate and undergraduate students.

Stony Brook University has evolved from a teacher's preparatory college to a world class research institution. The combined efforts of its dedicated students, faculty, and staff have led to the fulfillment of the University's original mandate to "stand with the finest in the nation."